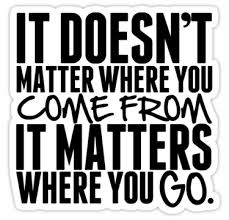 In 1989; i was using…alcohol more than drugs. Many nights, i’d split a 12 pack with Mr.X and on more than one occasion, i polished one off by myself.

Nobody ever called me an addict then…but it certainly runs in my family; we are a clan that self-medicates…that gambles…that overeats.

i’ve lived the chaos that swirls in the house and lives of addicts…i’ve chosen to not live like that again.

Master celebrated a monumental milestone in recovery today. i don’t think He really grasps the full extent of the gift He gave Himself or how His growth has impacted the lives of those around Him.

i’m  typing this into the tiny screen of my phone…as my lover drives us home from a kink event several states away.  Our headlights barely illuminate the road ahead and the rest of the world has slipped into inky blackness beyond. i can’t think much past this slice of my life…the loves i share…this life i’m living and how rich and full it is. i had a rough patch earlier today but even that moment was REAL which is preferable to the bullshit that i accepted as “experiences’ before.

my Master…if He were in this car with me right now, i think i’d share this seemingly inconsequential little tidbit:

Master… my K messaged me this weekend…upset that she had consumed bread that contained animal products. Her initial text -unseen by me until later- was closely followed by a second one where she told me she hadn’t done it intentionally so she wasn’t going to beat herself up about it. i thought…that sounds like You, Master .. then i realized… It IS my Master’s voice…spoken TO me and then BY me. i’m listening, Master, and she’s listening .

What You do matters, Master

What You say matters, Master

Who You WERE matters only inasmuch as that is not who You ARE any longer, Master

In My Head… In My Cloud